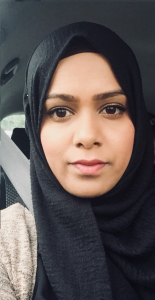 Nasreen, from Wednesbury, was looking for an opportunity to take up an active role in her community to make a difference, so when her workplace signed up with Inspiring Governance to promote the opportunity to become a school governor, she leapt at the chance.

“I’d already been a school governor at my child’s primary school for four years so I had a wealth of experience. I signed up to Inspiring Governance through my workplace. When George Salter Academy sent me an invitation through the platform inviting me to become a co-opted governor for the school, I was happy to do so,” says Nasreen. “It was a change from a primary school, to a secondary school which is an academy, which meant facing different challenges. It had recently appointed a new head and moved their Ofsted rating from being in Special measures to Good. I think that’s what drew me to saying yes as my previous school I had been governor at was Outstanding at Ofsted and I wanted to be part of a journey to contribute to bringing the school from Good to Outstanding status.”

Nasreen, 34, was confident that her workplace skills, specifically her knowledge of strategic leadership and accountability, were some she could utilise to benefit the school. “This is something that I do in my every day working role,” says Nasreen. “I hold people to account and have to gather requirements from an operational perspective. I monitor them and so forth. I put that accountability in place to meet objectives.”

In addition to her role as a governor, Nasreen goes into schools to give careers talks.

“I do a lot of voluntary talks with year 10-12 pupils encouraging them to join the tech industry and encourage them to look at careers within tech as it’s the future. It’s a bit of a grey area for women, especially to go into tech. It helps that I’m of a BME (minority ethnic background) and I’m an outwardly Muslim woman who wears a headscarf, this helps me to encourage people of BME background that there are no barriers to reach and pursue your career aspirations. Not many women pursue careers in tech. I like to be a role model to promote and inspire young girls to consider options in this area, so I go around schools and give talks on what we do and how we develop IOT (Internet of Things) to keep up with the changing world.”

Nasreen also works as a voluntary careers mentor at her workplace, helping colleagues update their CVs and often recommends school governance as a way of upskilling and building confidence. It’s no coincidence this experience has led to her putting herself forward to being appointed the careers link governor at George Salter Academy. “They were looking for someone to take up the role as a careers link governor, to be a link or be a liaison between the governing body in this particular area,” explains Nasreen. “Again, it’s talking about accountability, and I’ve put forward that I can come in and do careers talks as part of me contributing to my role as governor and helping shape the future.

“Although I’m fairly new to this school, there’s a lot more that I’ll be doing going forward and I’m confident I can utilise the skills that I’ve currently got.”

But it’s not just what Nasreen has provided to schools in her role as a governor, she is clear that the skills flow in both directions.

“I’ve only been in my current role coming up to two years at work, so I was a governor at my child’s primary school before that. Through governance, I learnt how to lead better. I applied the leadership skills I’d learned during my governance to my working role.  It also made me more confident when having to look at monitoring and accountability. Not that many people are confident enough to hold people to account, but in a governor role you can see it’s not a bad thing and you do that for the greater good to reach a common goal. They’re transferable skills you could take to any job really.”

Nasreen estimates how much time her governor work takes – “we have a two-hour meeting once a month during the school term time then the odd hour here and there if there is any training required, but anything voluntary, like the career talks I want to do, will take more time. I’m lucky that my workplace, HomeServe promotes governance and allows you to have time off for governor meetings or anything governor related. That’s why with this role I can do a bit more than in my last school where I didn’t have that support.

“I would say to anyone thinking of becoming a school governor –  give it a try. It definitely built my confidence and helped my leadership and communication skills. You get a lot out of it, and it’s rewarding to help a school do well and give something back into your community”.